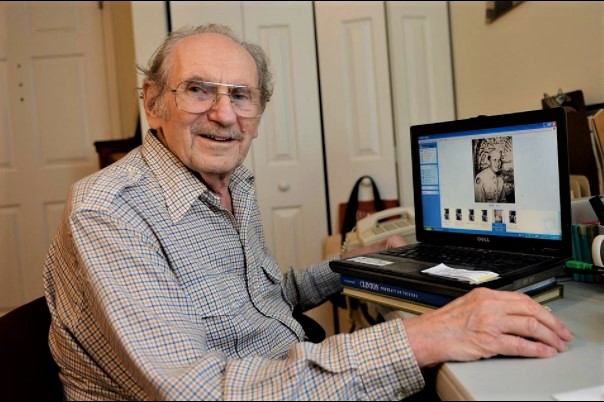 Lester Sumner Gediman, 95, passed away most peacefully on July 31, 2021, at New Horizons in Marlborough, MA.

He was born on May 1, 1926, in Boston, MA to Jacob “Jack” and Mary Gediman. Les grew up in Boston where he graduated from Boston English High School. After high school he served in the Air Force during WWII, attended the School of the Museum of Fine Arts, Boston and the Accademia di Belle Arti in Florence Italy where he met his future wife, Claudia. They were wed in Florence and remained happily married for 69 years.

Les was a kind and loving renaissance man; an intelligent, positive, and engaging gentleman with a quick and clever wit. His full life’s list of professions and passions included photographer, exercise instructor, art teacher, and electrical engineer. At the MIT Instrumentation Labs, he helped develop the guidance system for NASA’s Apollo 11 manned space flight to the moon. He later received his BA in Psychology at Framingham State University. In the 1970s, he taught art and theater arts at Newton South High School, where he greatly enjoyed mentoring his many students. He retired at the age of 62, enjoying many winters in St. Augustine, FL with his wife.

Les was preceded in death by his spouse, Claudia Gediman, who passed just eight months prior. He is survived by his son, Marc Alex Gediman and wife Diana of Marblehead, MA; son Dan Gediman and his wife Mary Jo Gediman of Louisville, KY; grandchildren, Ben and Maggie Gediman; sister-in-law Bernice Gediman, and nieces Jana Gediman and Maxine Gediman of Boynton Beach, FL, and other relatives.

Due to the COVID pandemic, a celebration of life will be planned for a later date. Memorial contributions can be made to Garden in the Woods in Framingham, MA.